I’ve not been writing very much over the last year, but I have still been collecting (and in a few cases, disposing of) watches.

A recent addition has been yet another Seiko chronograph, but a real diversion from my norm. Most of my interest in Seiko chronographs centre around those with the 6139 and 6138 movements, both related and featured in numerous previous posts. The 6139 famously went into space on the wrist of Col Pogue, and was arguably the very first automatic chronograph to reach the market. The 6138 movement added another dial (to count hours of the chrono running) and the ability to be hand-wound as well as automatic.

But a little-known (to non-Seiko-nerds at least) historical curiosity was that in the golden years of the 1960s and 70s, Seiko ran two competing factories – Daini (near Tokyo) and Suwa, an offshoot near Nagano, about 150 miles away. The arrangement started as an attempt to have one established factory continue to churn out worthy and popular timepieces, while a more pushy bunch could do more innovative and off-the-wall things, and keep both honest. Both factories were encouraged to compete with each other for the same space, while (for the most part) sharing nothing – no designs, no parts – when developing their own ranges. There’s a really great podcast from Atlassian which looks at the history of the competition between the factories – Seiko’s Duelling Factories – Teamisty Podcast – Work Life by Atlassian.

Daini watches had a lightning-bolt type logo, while Suwa watches wore a different logo on the dial and on the caseback – as seen on the silver-dial Pogue, just between the hands and the subdial: As time went on, the upstart Suwa Seikosha ran the Grand Seiko line and produced the 6138 and 6139 watch families, whereas the more established Tokyo Daini pushed the boundaries of timekeeping accuracy with its high-beat King Seiko range and also developed its own automatic chronograph movement – the 7016. The 7016 movement arrived a couple of years after the 6139, and watches that feature it are much less popular than its Suwa sister, so you see them pop up for sale a lot less regularly. At one time this meant they were probably cheaper but that may be changing as finding good ones takes a while.

There are so many differences in the movement itself – the sub-dial on the 7016 having 2 hands, one which shows elapsed minutes that the chronograph has been running, and the other showing how many hours, but there are subtle differences too – compared to the 6139’s 30-minute only chrono, or the 6138 needing two subdials to show the 12 hour count. Also, the minute hand on the 7016 chrono dial “sweeps”, meaning that as the chrono seconds hand ticks round, the minute hand is gradually moving all the time. On the 6139, the minute hand ticks or “jumps”.

In many ways, the 7016 movement is more advanced and made to a higher level than the 6139, and for a good while it was the thinnest automatic chronograph with a vertical clutch mechanism (that’s splitting hairs, isn’t it…)

This particular watch is a 7016-5000 from August of 1972 (the 701x family were made from 1971 to 1978), and has earned the nickname “Monaco” given its passing square-faced similarity to the Heuer Monaco. The case size is a good bit smaller in every dimension than the Heuer. Here it is next to a modern blue-dial Monaco, a CAW211P… I used to have a grey-dial Monaco, CAW211B but that has flown the nest, so I couldn’t compare it side-by-side. There was also a CAW211C produced with a silver dial, that’s possibly closest in look to the Seiko in question here. 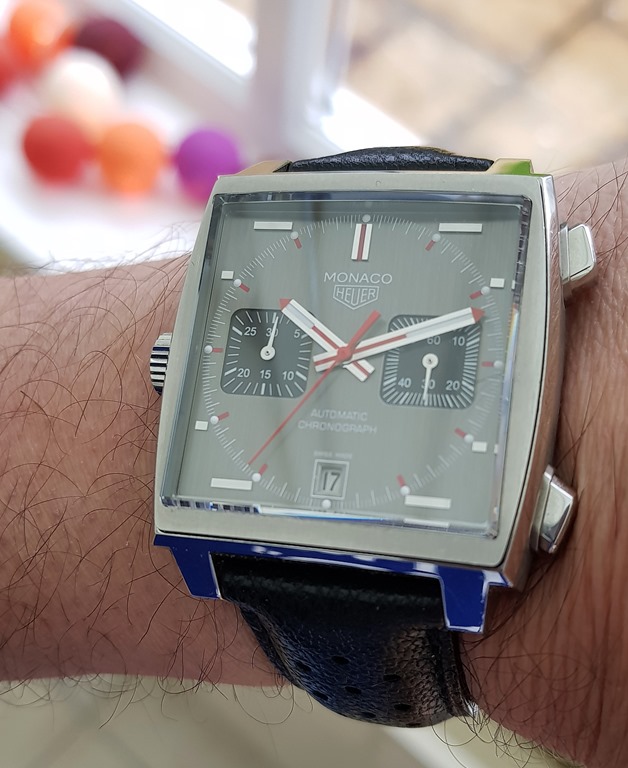 Making any square-dial watch presents problems around water ingress, since the shape means the corners are more likely to be breached by water or just atmospheric moisture – one reason why a lot of vintage Heuer Monacos have perished dials because the gasket that goes between the dial and the crystal disintegrates and lets in water.

The Seiko 7016-5000 Monaco has quite an unusual case arrangement – rather than having a case back that screws or pops off, the whole top separates by pressing in a couple of latches on the main case, leaving the movement and dial held into the monocoque – you need to press a lever through a little notch on the dial at 2 o’clock; that lets the stem pull out, and that allows the movement to drop out.