FIRST PUBLISHED 15 Nov 2019 – I like a nice Pogue, as the many posts on here will attest. Every watch collector who has a soft spot for the Omega Speedmaster should get themselves a Pogue as well, as the size, weight and look of them are just right, IMHO.

If you’ve lived under a rock, the tl;dr version of events was that Col William Pogue, an astronaut with NASA, went into space to the final Skylab mission, blasting off at just after 2pm UTC on 16th November 1973. The crew spent what was then a record amount of time in space (84 days), and also changed NASA’s way of dealing with astronauts, by going on strike for a day and switching off the radio link with Mission Control. None of the crew went back to space, so maybe NASA didn’t like their insubordination…

Anyway, years later, an eagle-eyed watch fan spotted Pogue was wearing something other than an Omega Speedmaster (the standard issue timepiece for astronauts, normally worn on a velcro strap), and wrote to Pogue (now since RIP) to ask him what it was. Turns out it was a Seiko chronograph he’d bought when his training started, and since he used it throughout and only got his NASA-issue Speedmaster late in the process, he decided to take it with him into space. There are several photos of him wearing the Speedmaster on his right wrist and the steel-braceleted, yellow-faced Seiko on the left. The Seiko was therefore calculated to be the first automatic chronograph watch worn in space.

As a result, the Seiko 6139-600x is collectively known as the “Seiko Pogue”, though some hair-splitters will insist that only the yellow-faced watch can be called that (there being no such thing as a “Blue Pogue” or a “Silver Pogue”), or even that only the 6139-6005 (which did not say CHRONOGRAPH on the dial, only SEIKO and AUTOMATIC) can be called “Pogue”, or sometimes referred to as a “True Pogue”. If you want to be extra nerdy, you could say that only a yellow –6005 with WATER 70m RESIST on the dial at 9 o’clock can be called a Pogue, since that’s closest to what he actually wore.

As well as Nick’s lovely Pogue (reckoned by the watchmaker who serviced it to be among the very best he’s seen), and the various others already featured on here, several others have passed through my hands.

Here is an R-dial from May 1975 which I bought, had serviced, put on a new bracelet (a bit of a naff aftermarket one that felt cheap if I’m honest) but passed on to a fellow watch fan who saw it listed on eBay but came to collect it with cash in hand, and spent a while drinking tea, nattering about watches and cars and stuff. Just the kind of transaction I like. 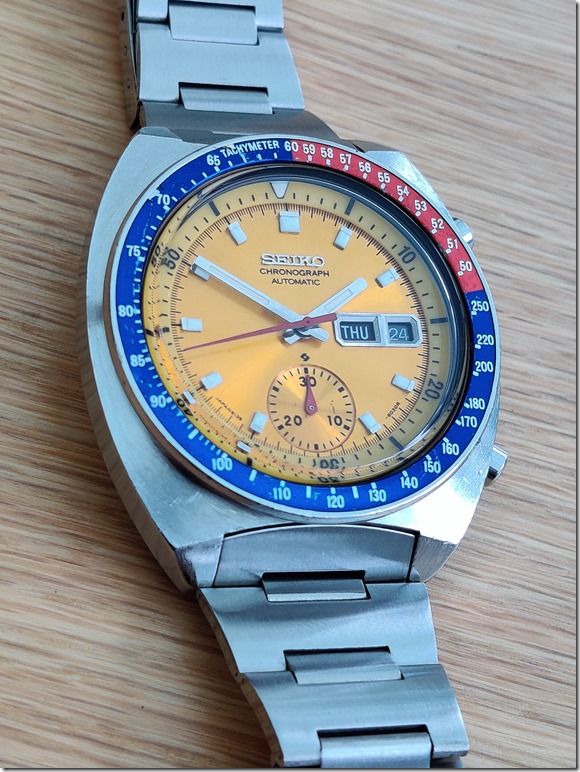 And here’s a 1976 T-dial which is in better nick than the ‘75 R, but not as good nick as Nick’s ‘76 T, if you catch my drift. This one has gone to another friend who shall remain nameless, since he hasn’t broken the news to his wife that he’s got a new watch. He carries it out of the house in bubblewrap and a plastic box, and swaps it onto his wrist when safely out of sight. 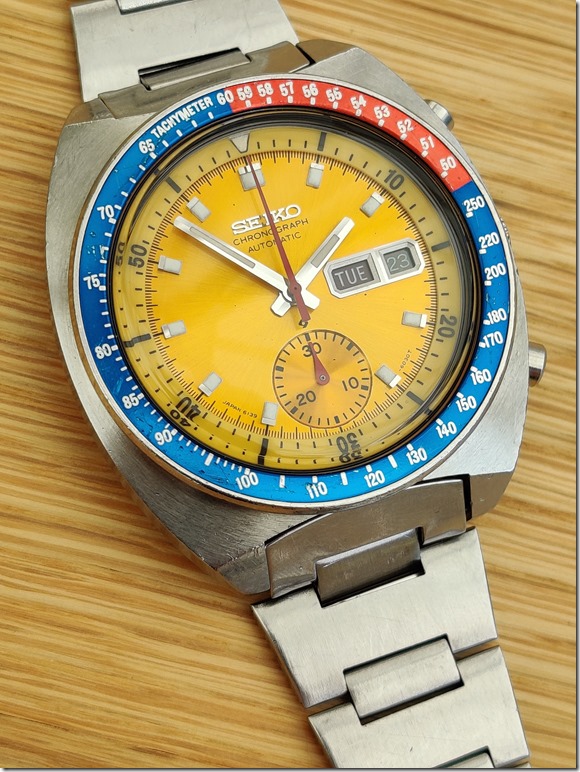 So, all of this brings us to the point of the post – in remembering Bill Pogue and linking back to the now-widely-appreciated watch that shares his name, the 16th November has been called out as International Pogue Day. Expect Instagram to have lots of Poguey Pics, and every collector who owns one of these watches is dutybound to wear it on that day.

What’s new this year is the revelation that Pogue’s Seiko was in fact one of the first two automatic chronographs in space – one of his colleagues, Col Jerry Carr, had been given a Movado automatic chronograph to take into space with the express view of testing if it worked in zero-G. The donor of that watch was General Thomas Stafford, commander of Apollo 10 and the 1975 Apollo-Soyuz test project. Still, Pogue took his own watch up there not as an experiment but because he wanted to use it. Let’s still celebrate that fact!

So, to reflect this downgrade in status to being the joint-first-chronograph in Space, watch fan Mr Jones has modified the banner used for International Pogue Day…