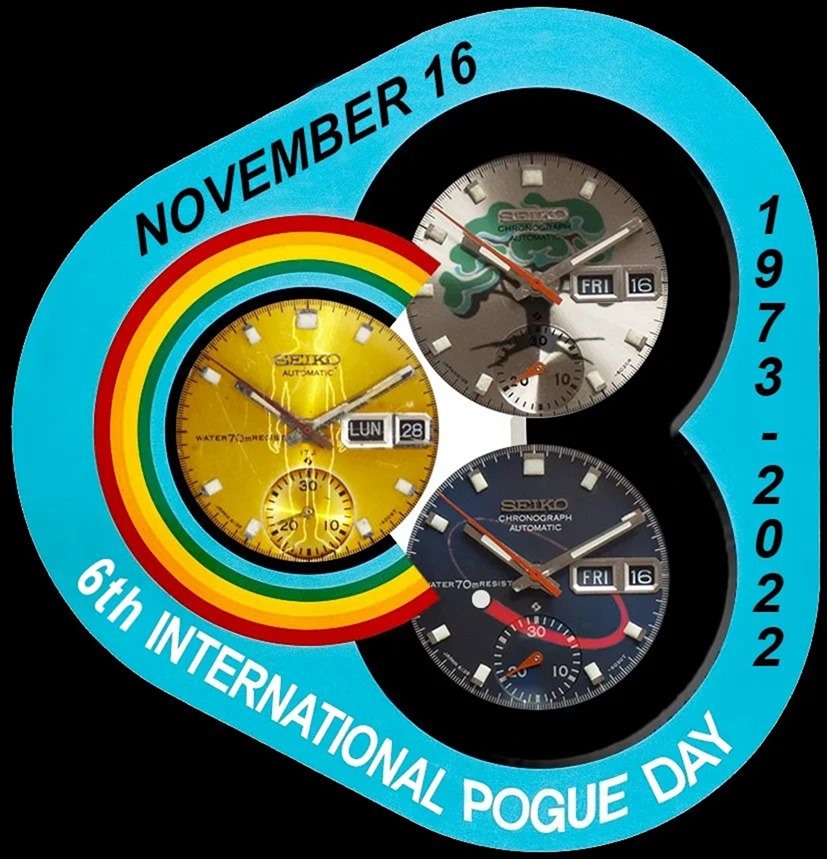 Today is the 49th anniversary of the launch of Skylab 3, the mission that carried Col Bill Pogue into space with what has been recognized as the first automatic chronograph watch to make it into space – his trusty Seiko 6139-6005, now known as the “Colonel Pogue”. Much digital ink has flowed on this blog previously – on International Pogue Day and on the various Pogues in general.

The narrative of the Pogue as being the first automatic chrono carried aloft into the great beyond was somewhat ruined by the news that the same flight had another astro – Col Jerry Carr – carrying another automatic chronograph, the nowadays much rarer and more valuable Movado Datachron HS360, powered by the same Zenith “El Primero” Cal 3019 PHC movement which competed with Seiko’s 6139 and the Chronomatic consortium’s Cal 11 to be the very first automatic chronograph in the market. Seiko won that race, but it seems the trip to space was a dead heat.

Nevertheless, the Pogue in all its forms has attained iconic status – even featuring in mainstream media like GQ – and is still relatively affordable today.

How affordable? Well, that all depends. For a working watch (ie ideally serviced in recent past) with no massive dings on the body, a crystal that you can see through, no great damage to the dial or hands other than a bit of patina… you’d expect to shell out $700 or more. If it’s on an original bracelet, has any kind of provenance and is known to be correct, then for a yellow PROOF dialled watch, you could shell out a few $thousand.

Almost everything you’ll find on eBay – especially if it looks shiny and new – is faked up with aftermarket parts. If you really want to buy a good Pogue, the only place is to go to a reputably dealer like Hub City Vintage or get one through a forum (such as SCWF) where honest and knowledgeable folk with more than a few of them tend to hang out.

Some collectors get hot under the collar on the definition of “a Pogue” – the “True Pogue” should be a yellow, 1971-era (so it’ll have WATER 70M RESIST on the dial) American issue watch, therefore a 6139-6005 reference with only AUTOMATIC under the Seiko logo on the dial (not CHRONOGRAPH AUTOMATIC). Most would accept any yellow 6139-600x to be a “Pogue” and the more relaxed will even tolerate the “Blue Pogue”, “Silver Pogue” or the rare Japanese special edition “Teal Sunrise Pogue”. Things get stretched a bit with the “Coke Pogue” (which is actually a 6139-6030 reference, similar but different enough).

It’s been a little while since I’ve written about my own Pogue obsession collection. Here are a few that joined the fold. 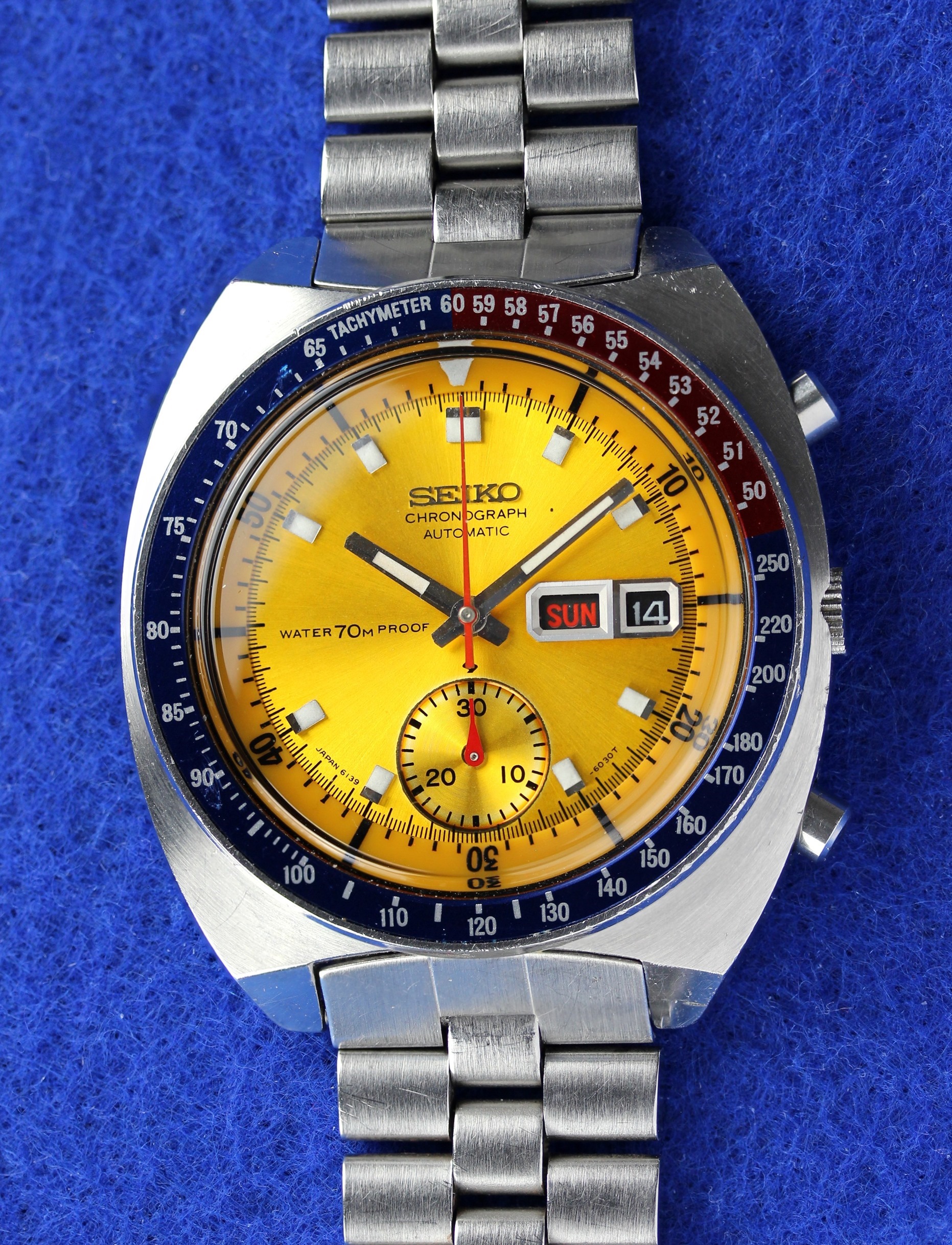 It’s a lovely thing. Only a few little marks on the dial and some slight darkening and red “halo” on the subdial. These are caused by the breakdown of the lacquer that was used to coat the dial – formed of brass then painted with the sunburst finish, it was then sealed – but the subdial edge is inevitably a little thinner and as the lacquer starts to break down over time, that area is often the first to discolour. You might see “beauty spots” like this one has under the 1 o’clock marker, and some will show discolouration starting from teh holes where the applied Seiko logo is. It’s a fair bet that in 10 or 20 years, most yellow Pogues will have deteriorated further“ 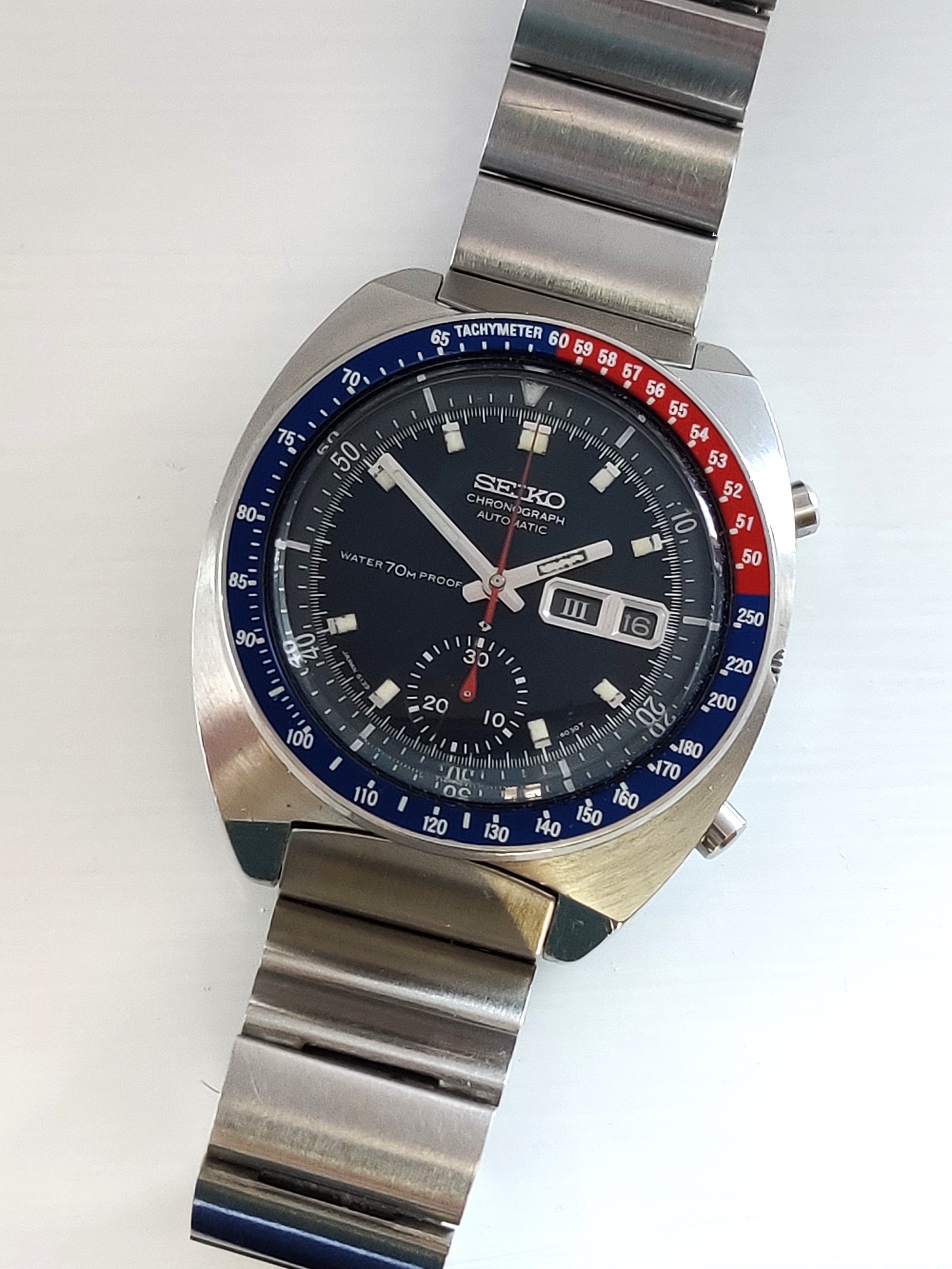 Slightly later according to the serial number, but still dated to February 1970, this blue dial was bought primarily because of its original bracelet – it’s a Stelux “chiclet”, identifiable by the patent numbers on the inside of the links and very rare.

It’s not actually all that comfortable to wear, if truth be told – the Stelux “President” as worn by the yellow Feb 70 watch above is far and away the best. The narrow H-link on the next watch is nice too, if a bit jangly… 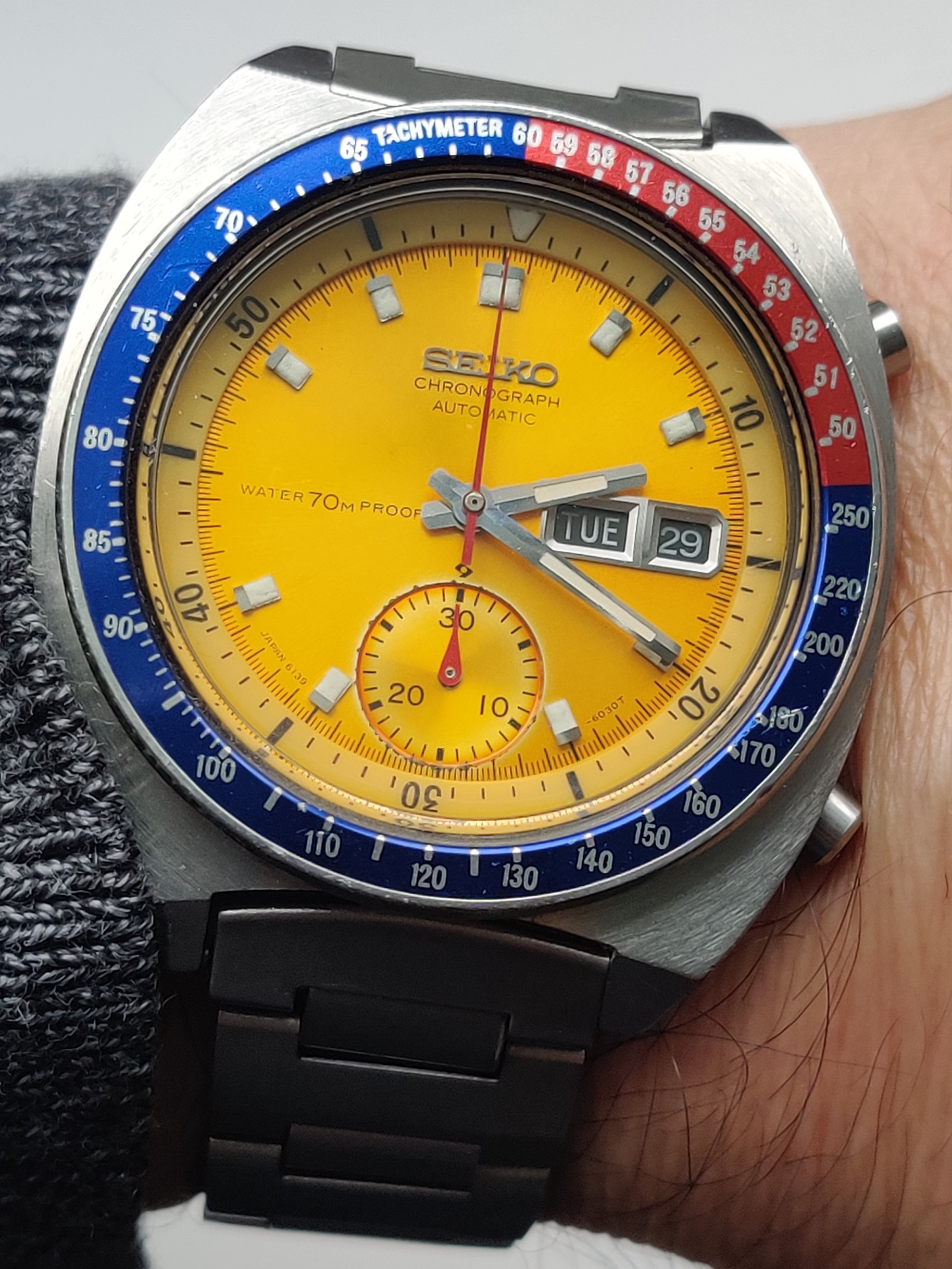 Only a few months older than the first one, but we’re now into transitional territory – the dial and case back still say PROOF / WATERPROOF respectively, but the reference is now 6001 and the case doesn’t have a notch. Otherwise, it’s the same as the –6000 – a 6139A movement, a 2-piece chronograph hand. Despite a little more nibbling round the subdial, this one is in great shape though at some point it will go for a service and get a new crystal as there are a couple of marks on the current one.

And to complete the colour series, how about this… 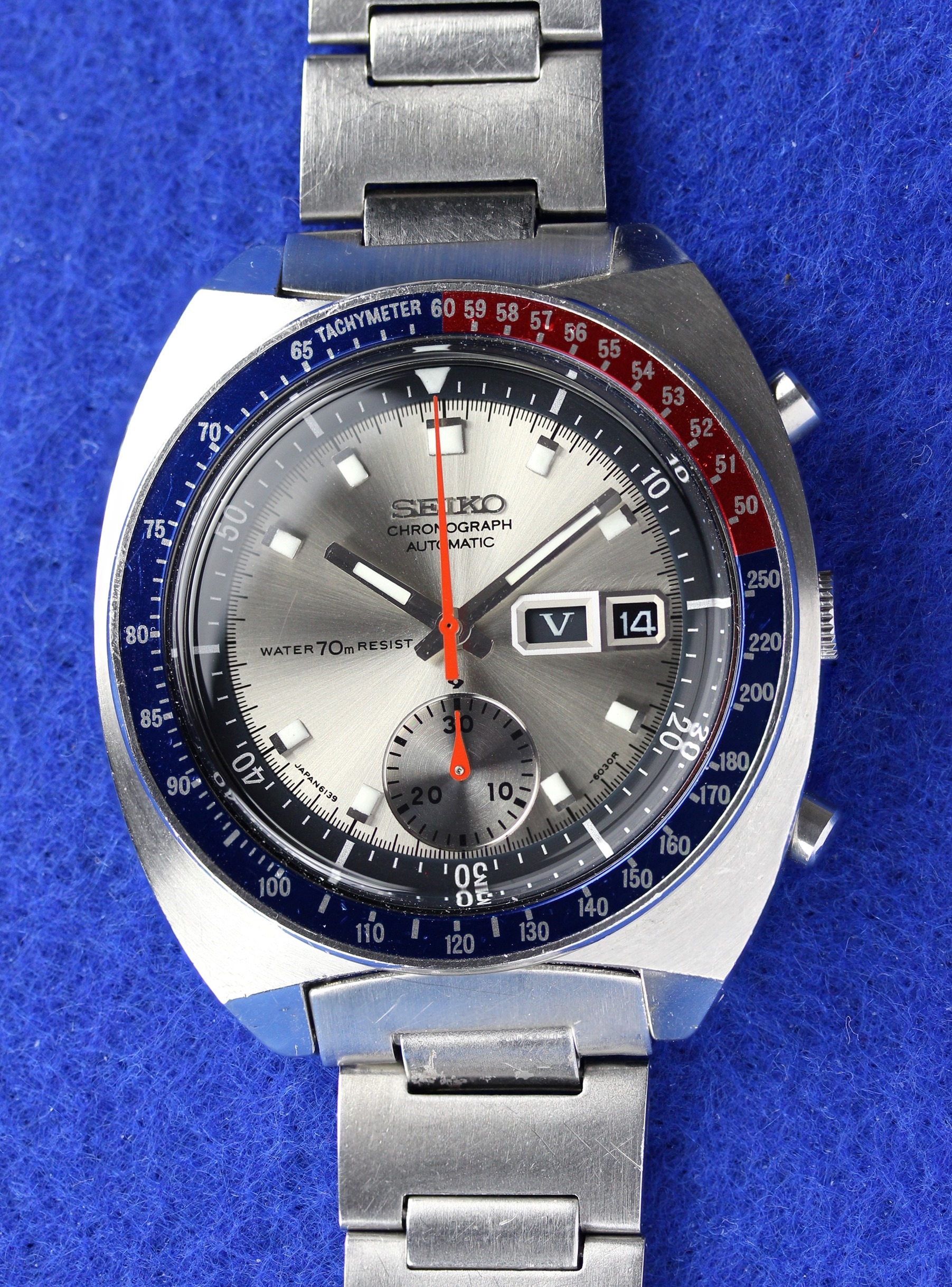 Non-notched case, single piece chronograph hand and it has a 6139B movement inside. All of the previous watches had 6030T dial markers at the bottom right – see more on the significance here – but this one is not only a late “RESIST” model (the 9 o’clock text went away in mid/late 1972), it’s silver – which is rare – and it’s an R-dial, meaning the finishing of the dial is much more pronounced. The sunburst effect is really quite striking, and I think it looks better than the 6030T silver dials, even though in both blue and yellow variants, I prefer the 6030T over the 6030R. There is a school of thought that T and R dials might have been made by different factories.

Anyway, enjoy International Pogue Day and keep on wearing and digging into the history of these most excellent watches!